With the volume of construction output expected to grow at 85% to USD 15.5 trillion worldwide by 2030, with three countries, China, United States and India, leading the way and accounting for 57% of the total growth, the global façade market is expected to grow further in the forecast period of 2021-2026 and attain a value of about USD 320 billion by 2026, driven by the rising disposable incomes of consumers and the increased focus on external façades of buildings.

The growth of the global facade market has been catalysed by the rapid urbanization occurring globally which is creating the need for the construction of new buildings. The growing construction sector with the building of new residential, commercial, and industrial complexes in Asia Pacific, specifically in China, India, and Southeast Asia, has made the region a dominant force in the global façade market. The growth of the global façade market in the region was further fuelled by the growing number of high-rise buildings being constructed as well as government initiatives encouraging the building of educational institutes, hospitals, etc in the developing countries. In 2018, Asia Pacific was the leading market for façade followed by North America and Europe.

The North American and European markets are also seeing steady growth due to the rising demand for façade materials. These markets are especially driven by the innovation of environmentally friendly materials, especially in the US and the UK where the customers are poised to be more receptive to the materials for renovating or redeveloping buildings. 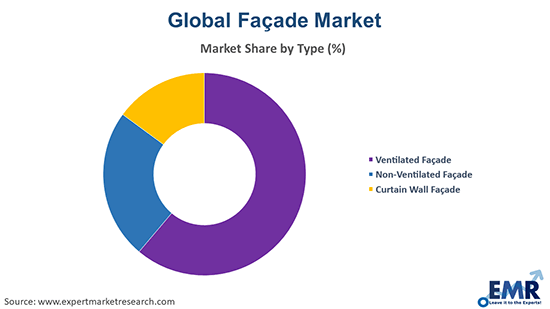 Façade is an architectural term which literally translates from French to ‘face’ and usually refers to the building exterior. The market has been driven by the increased focus of consumers towards the external appearance of a building. Along with adding to the aesthetic appeal, it also acts as insulators against heat, cold, moisture and noise and protect the structure from damage. The global façade market can be mainly divided into the ventilated and non-ventilated.

While non-ventilated façade dominates the market currently, ventilated façade is witnessing a rising demand with curtain walls projected to be the fastest growing segment due to increased demand in the commercial buildings sector. It is expected to see high demand from the US, UK, and other parts of Europe with lower temperatures, especially in the residential sector, due to its ability to transmit heat to create warmer interiors.

The materials can be divided into the following:

It finds wide applications in the following:

Metallic façade materials like steel and aluminium are increasingly being used in the modern and retro-style buildings, specifically to construct cladding walls and structural panels. Their popularity is due to their low maintenance cost, and resistance towards weather, fire and water as well as being long-lasting and environmental-friendly. Aluminium, especially, finds extensive application as a façade material due to its lightweight and durable as well as owing to high elasticity which allows designers to modify its shape and size according to the requirements. Glass too finds wide demand due to their transparency. 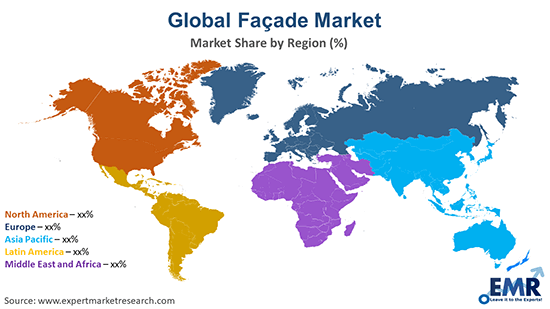 With the growing investments in research and development, the global façade market has undergone a number of technological advancements and changes, especially those related to resistance to extreme weather conditions, durability, waterproofing and permitting more natural light to enter the building. The architecture and construction industries are also carrying out major R & D operations to develop sustainable and eco-friendly façades which absorb solar energy, creating a new source of energy generation in residential and commercial buildings. These eco-friendly façades are expected to drive the global façade market in the coming years as they are seeing increased demand from prospective consumers, especially in the U.S., the U.K., Germany, and Japan.

Growing construction activity across the world due to the rising urban population, increasing disposable income and changing consumer perception about façade is the major driver of the market. Asia Pacific dominated the market in 2018 and is expected to continue being the largest market for façade in the coming years. The market in the region is aided by the growing industrial, commercial, and residential construction activity in China, India, and Southeast Asia. With the growing demand for residential housing due to growing urbanization in India, government initiatives like the approval of INR 60,000 crore for National Urban Housing Fund, and Pradhan Mantri Awas Yojana (PMAY) will be the major drivers of the market with future construction projects being planned and approved. In Europe too, residential construction activity has increased since 2016. The region, especially countries like Germany, Italy, U.K., and the Nordic countries, are expected to see further investments from private and public investors for new constructions of residences supported by various government schemes.

The report gives a detailed analysis of the following key players in the global façade market, covering their competitive landscape, capacity, and latest developments like mergers, acquisitions, and investments, expansions of capacity, and plant turnarounds:

What is the forecast outlook of the global façade market for 2021-2026?

The global façade market is estimated to reach a value of about USD 320 billion by 2026.

The growing investments in research and development is expected to be a key trend guiding the growth of the global façade market.

What are the major regional markets of façade, according to the EMR report?

North America, Europe, the Asia Pacific, Latin America, and the Middle East and Africa are the leading regions in the global façade market.

What are the materials used in the industry?

The materials used in the industry are glass, metal, plastics and fibres, and construction stone, among others.

What are the application sectors in the industry?

The major application sectors in the industry are residential, commercial, and industrial sectors.

The global steel grating market is driven by the rising use of steel grating in multiple end use industries. Aided by the growing technological advancements, the market is expected to witness a growth...
Read More

The North America ceramic tiles market is being driven by the growing product demand from the residential sector. Aided by the growing technological advancements, the market is expected to witness a f...
Read More

The global onshore oil and gas pipeline market is expected to grow in the forecast period of 2021-2026 at a CAGR of 5.4%.
Read More