The Indian ammonia market size reached a consumption volume of about 15.1 million tons in 2020. In the coming years, the market in India is expected to witness an annual capacity addition of nearly 9.27 million tons. The growth of the ammonia industry in India is being significantly aided by the rising development of the global market. 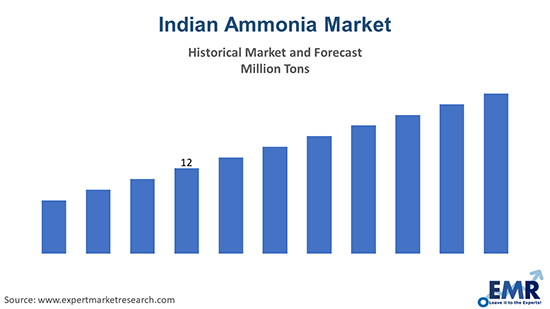 The Asia Pacific was the leading ammonia producing and consuming region in 2020. China is the leading producer of the product in the region. In the forecast period of 2022-2027, the CAGR of the Asia Pacific market is expected to increase at a rate of nearly 3%. Ammonia is manufactured mainly from coal gasification in China, whereas it is primarily obtained from natural gas globally. China is followed by India and Indonesia in terms of industry development of the product. The capacity of the product is expected to increase dramatically globally in the coming years.

The ammonia phosphate fertilizers sector dominates the end-use sectors in the industry in India. It is considered to be a vital nitrogen source for plant growth. Ammonia is also used in the production of different liquid fertilizer solutions consisting of ammonium nitrate, water ammonia, and urea. The product is widely used for agricultural applications as it reacts quickly with clay particles, organic matter, free hydrogen ions, and groundwater (which inhibits the volatilization of ammonia).

Ammonia refers to a colourless gas having an and extremely unpleasant odour which is suffocating. It dissolves readily in water and also forms a solution of ammonium hydroxide. The solution can also result in burns and irritation. Its gaseous form can quickly be compressed and, in its liquid form under pressure is colourless and transparent. It is typically delivered in the form of compressed liquid in steel cylinders. It is not highly combustible but can explode if exposed to high heat. Ammonia is used as a refrigerant because of its benefits, like high performance, environmentally friendly, requiring smaller pipes, and improved heat transfer features. 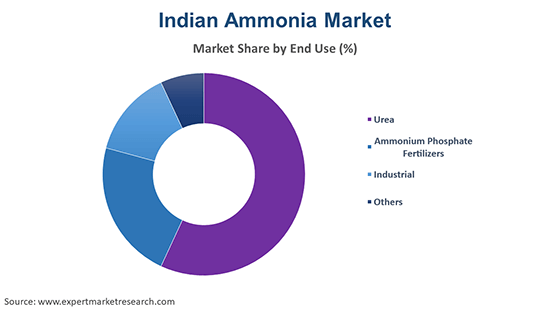 Based on physical forms, the Indian ammonia market can be divided into:

It finds its end-uses in the following sectors:

The states included in the regional markets include: 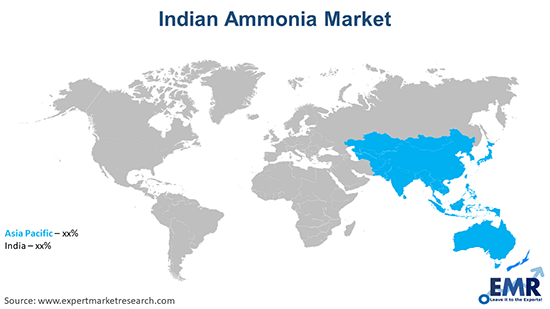 Fertilizer is the primary end-use industry for ammonia in India and it is also the major industry driver in the country at present. The growing food demand due to population growth and the growing emphasis on production protection will catalyse the fertilizer demand in India, thus enhancing the expansion of the Indian ammonia market. The industrial usage of the product in refrigeration is also an increasing end-use segment in India, which is propelling the Indian ammonia market growth. The rise in urbanisation is expected to accelerate the industry for ammonia in refrigerant applications for residential and commercial buildings. The processing of ammonium nitrate, which is a key component in the mining and explosives industry, is a further important application of ammonia. In the coming years, the rising domestic ammonium nitrate production is expected to increase the demand for ammonia in India. In addition, the Indian government's strong support is also catalysing the demand for the product in the region. Thus, the growing demand for the product is projected to drive the Indian ammonia market in the forecast period.

The report gives a detailed analysis of the following key players in the Indian ammonia market, covering their competitive landscape, capacity, and latest developments like mergers, acquisitions, and investments, expansions of capacity, and plant turnarounds:

The comprehensive EMR report provides an in-depth assessment of the Indian ammonia market based on the Porter's five forces model along with giving a SWOT analysis. The report also provides the price trends and trade analysis of ammonia.

What was the Indian ammonia market size in 2020?

In 2020, the Indian ammonia market attained a consumption volume of nearly 15.1 million tons.

The Indian market is aided by the growth of the Asia Pacific ammonia market, which is projected grow at a rate of about 3% in the forecast period of 2022-2027.

The market in India is estimated to witness a capacity addition of about 9.27 million tons annually in the forecast period.

What are the key industry trends of the Indian ammonia market?

Favourable government policies and support, along with the rising demand for ammonium nitrate, are the major trends propelling the market forward.

What are the major states for the market in India according to the market report?

Gujarat, Maharashtra, Rajasthan, and others are the leading states in the market in India.

What are the leading physical forms of ammonia in the industry?

Anhydrous and aqueous ammonia are the major physical forms of ammonia.

The ammonia phosphate fertilizers sector is the leading end-use sector in the market in India.

The Indian ammonia market attained a volume of 15.1 million tons in 2020 driven by the rising food demand and growing fertilizer demand. In the coming years, the growth of the market is projected to be driven by the growing demand for ammonium nitrate. The industry is expected to be aided by the Asia Pacific market, which is expected to witness a CAGR of 3% in the forecast period of 2022-2027.

EMR’s meticulous research methodology delves deep into the market, covering the macro and micro aspects of the industry. Based on physical forms, the market can be bifurcated into anhydrous and aqueous ammonia. By end-uses, the industry is segmented into urea, ammonia phosphate fertilizers, and industrial, among others. The major regional markets for ammonia in India are Gujarat, Maharashtra, and Rajasthan, among others. The key players in the above industry include Chambal Fertilizers and Chemicals Company, Gujarat Narmada Valley Fertilisers and Chemicals (GNFC), Indian Farmers Fertiliser Cooperative Limited (IFFCO), Krishak Bharati Co-Operative Limited (KRIBHCO), and others.