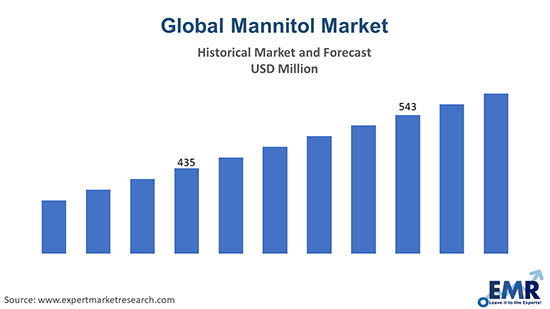 While mannitol faces competition from other polyols like sorbitol and xylitol, its demand, globally, has witnessed a stable growth. Its export demand is being driven by its application in the pharmaceutical industry. It also finds extensive application as a food additive. Pharmaceuticals and food additives, together, account for over 65% of the mannitol applications. Since, compared to sucrose, it contributes to a much lower hike in blood glucose, it is finding growing use in food products meant for diabetic patients. The growing cases of diabetes and obesity are leading to people seeking out healthier food options, further aiding the global mannitol market.

Mannitol is a naturally occurring sugar alcohol or polyol, which is 50% as sweet as sugar. It is found in granular and powder forms. It finds its major end uses in the pharmaceutical and food sectors. Its cooling effect is used to mask bitter tastes. It is available in either powder or granular forms. It finds its common applications in the following sectors: 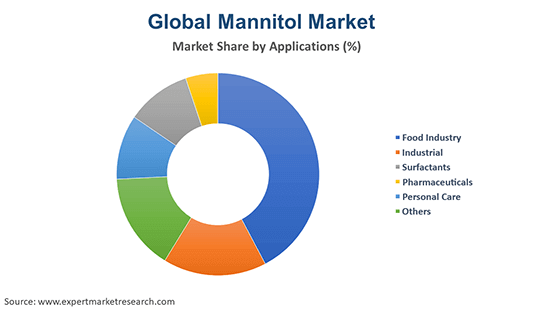 The report also provides an overview of the other regional markets like North America, Lattin America, Europe, the Middle East and Africa, and the Asia Pacific. 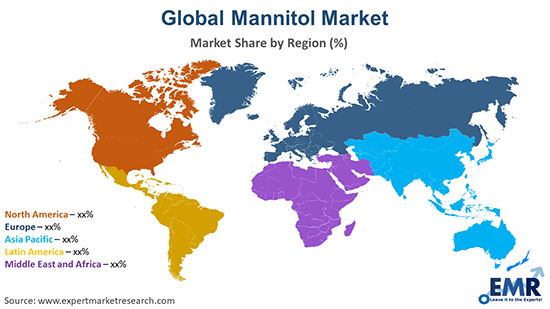 The global mannitol market is being driven by its rising demand as a food additive. The increase in the cases of diabetes is also aiding the industry for the polyol as it does not excessively increase the blood glucose level, and thus, finds extensive application as a sweetener for people with diabetes. The rising health consciousness among the consumers is also propelling the global mannitol market forward as it is a low calorie and non-cariogenic additive. The industry is being driven by its expanding end-use applications in the confectionery section. It is increasingly used in mint-based candies and gums because of its cooling effect. Due to its low hygroscopicity, leading to low absorption of water from air, it is extensively used as a coating in dried fruits, hard candies, and chewing gums. Additionally, due to its pleasant taste and mouthfeel, it is also finding rising application in chewable tablets.

The pharmaceutical sector is one of the fastest-growing application sectors for mannitol. The industry is driving the growth in the global demand for the polyol. It is used as an excipient in the formation of tablets. It is also finding uses as a diuretic and is finding rising applications in the treatment of renal failure, along with heart and lung diseases. The rapid urbanisation, along with a rise in the middle-class population is aiding the industry as the consumption patterns are changing with processed foods witnessing an increase in their consumption levels. The global mannitol market is also finding impetus for its growth in the technological advancements taking place in the industry, which are seeking to reduce the manufacturing cost. In the coming years, rising innovations in the sector will further propel the industry forward. It is expected to witness a steady demand as its applications are seeing an expansion.

The report gives a detailed analysis of the global mannitol market, covering their competitive landscape, capacity, and latest developments like plant turnarounds, capacity expansions, and mergers, acquisitions, and investments:

The EMR report assesses the global mannitol market based on Porter’s Five Forces model. A SWOT analysis has also been provided. The comprehensive report gives an in-depth insight into the manufacturing process and the costs involved.

What was the global mannitol market size in 2020?

The global mannitol market reached a value of USD 382 million in 2020.

The market is estimated to reach a value of about USD 497 million by 2026.

The major drivers of the industry include rising disposable incomes, increasing population, rising demand as a food additive, rapid urbanisation, the rising cases of diabetes, and growing health consciousness.

What are the key industry trends of the global mannitol market?

The growing technological advancements are expected to be a key trend guiding the growth of the market.

What are the leading forms of mannitol in the industry?

The leading forms of mannitol in the industry can be divided between granular and powder.

What are the major application sectors in the market?

The major application sectors in the market are food industry, industrial, surfactants, pharmaceuticals, and personal care, among others.

The leading players in the global mannitol market are Cargill, Incorporated, Roquette Frères, SPI Pharma, and Pfanstiehl, Inc., among others.

The global mannitol market attained a value of USD 382 million in 2020, driven by the growth downstream demand. Aided by the rising health consciousness, the market is expected to witness a further growth in the forecast period of 2022-2027, growing at a CAGR of 4.5%. The industry is projected to reach USD 497 million by 2026.

EMR’s meticulous research methodology delves deep into the industry, covering the macro and micro aspects of the industry. Based on forms, the market can be segmented into granular and powder. On the basis of application, the market is divided into food industry, industrial, surfactants, pharmaceuticals, and personal care, among others. The major regional markets for mannitol are North America, Europe, the Asia Pacific, Latin America, and the Middle East and Africa, with Asia Pacific accounting for the leading share of the market. The key players in the above industry include Cargill, Incorporated, Roquette Frères, SPI Pharma, and Pfanstiehl, Inc., among others.