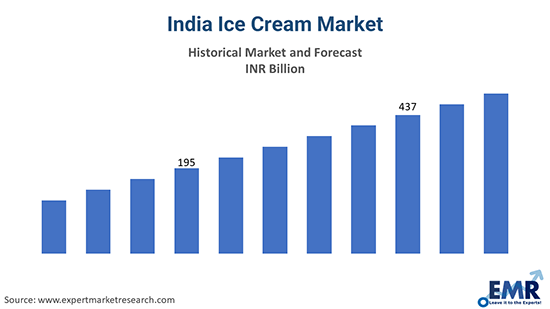 Ice cream is currently considered to be one of India's most popular desserts. Due to the prevailing hot and humid climate in the region, as well as the shift in customer food tastes, dessert sales are constantly increasing throughout the region. Maharashtra is one of the largest markets, accounting for almost 15% of the total India ice cream market share. It is being followed by Uttar Pradesh and Gujarat, among other major regions.

Ice cream refers to a frozen dessert made of milk, sugar, cream, eggs, berries, and flavours. This also includes stabilizers, like gluten, to ensure a smooth texture of the mixture. It is distinguished by a smooth, fluffy texture that is accomplished by rapidly shaking the frozen mixture to prevent the development of large ice crystals. Vanilla, chocolate, raspberry, strawberry, and butterscotch are among the most popular flavourings used in ice cream 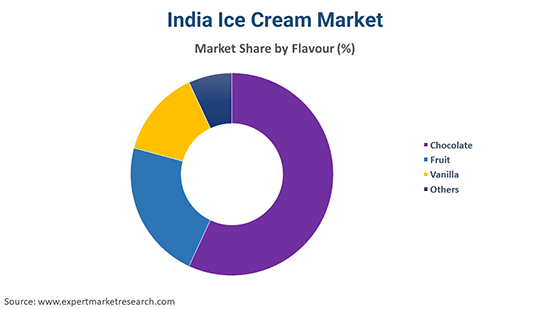 The major types in the industry include:

Based on flavour, the India ice cream market can be divided as follows:

The market, on the basis of format, can be segmented into:

On the basis of end-uses, the industry is divided into:

Based on distribution channel, the market can be divided into:

The regional markets included in the market in India are as follows: 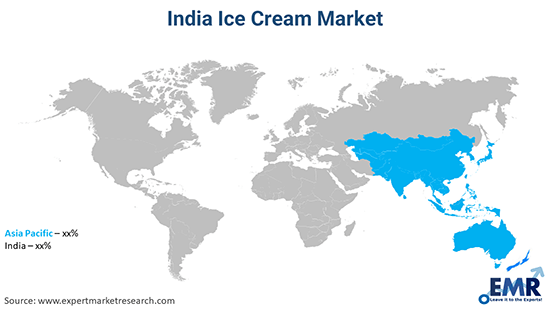 India is among the world's largest manufacturers of dairy products, which is a major driver for the India ice cream market. In addition, rapid urbanisation as well as growing per capita income rates, have opened up growth opportunities for the country's premium ice cream variants. Consumers are eager to experiment with new flavours and styles that have led to the introduction of a wide range of products in the market, like sundaes.

In addition, regional and conventional flavour variants are rapidly gaining popularity in the market. The availability of wide range of flavours including exotic Indian flavours like Anjeer, Badam, Kesar, Pista, Nolen Gur, and Rajbhog as well as several kulfi variants like Rabri, Faluda And Matka Kulfi, is driving the market further. In addition, the expansion of online retail channels, offering easy shopping, a wide range of flavours, and a reasonable price point, along with improvements in the infrastructure of the cold chain, also contributes significantly to the development of the industry. Other factors, including the emergence of intense competition between leading domestic and international market players and the launch of gluten-free and vegan variants, are also propelling the growth of the India ice cream market.

The report gives a detailed analysis of the key players in the India ice cream market, covering their competitive landscape, capacity, and latest developments like mergers, acquisitions, and investments, expansions of capacity, and plant turnarounds. The comprehensive EMR report provides an in-depth assessment of the market based on the Porter's five forces model along with giving a SWOT analysis.

The market is estimated to reach a value of about INR 442 billion by 2026.

The major drivers of the industry include rising disposable incomes, increasing population, rapid urbanisation, ease of availability, expanding distribution channels, and the rising competition between the key players.

What are the key industry trends of the India ice cream market?

The availability of a wide range of flavours, as well as the launch of gluten-free and vegan variants, is expected to be a key trend guiding the growth of the industry.

The major types can be divided into impulse, take-home, and artisanal ice cream.

What are the major flavours of the product in the industry?

The major flavours include chocolate, fruit, and vanilla, among others.

What are the significant formats of the product in the industry?

The most significant types of formats of the product in the industry are cup, stick, cone, and brick, among others.

What are the leading end-use segments for the product?

The leading end-use segments for the product are retail and institutional.

The major distribution channels in the industry are supermarkets/hypermarkets, ice cream parlours, convenience stores, and online, among others.

The India ice-cream market attained a value of INR 201.4 billion in 2020 driven by the rising urbanisation and increasing diversification of product. Aided by the improvements in the infrastructure of the cold chain, the industry is expected to witness a further growth in the forecast period of 2022-2027, growing at a CAGR of 14%. The industry is projected to reach INR 442 billion by 2026.

EMR's meticulous research methodology delves deep into the industry, covering the macro and micro aspects of the industry. Based on its types, the market can be segmented into impulse, take-home, and artisanal ice cream. By flavour, the industry can be divided into chocolate, fruit, and vanilla, among others. On the basis of end use, the industry is categorised into retail and institutional. Based on formats, the market can be segmented into cup, stick, cone, and brick, among others. By distribution channels, the market is segmented into supermarkets/hypermarkets, ice cream parlours, convenience stores, and online, among others. The major regional markets are Karnataka, Maharashtra, Tamil Nadu, Delhi, Gujarat, Andhra Pradesh and Telangana, Uttar Pradesh, West Bengal, Kerala, Haryana, Punjab, Rajasthan, Madhya Pradesh, Bihar, and Odisha, among others, with Maharashtra accounting for the largest share of the market.