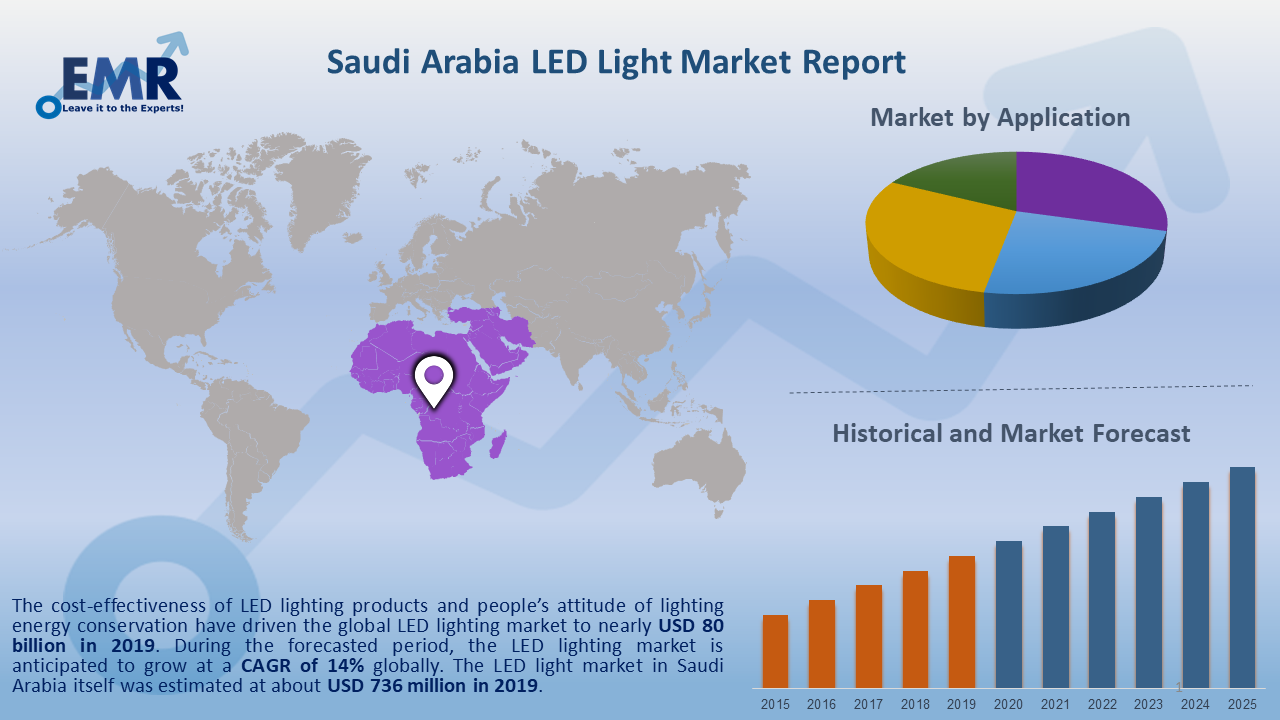 While Saudi Arabia’s oil reserves are abundant, the KSA has been confronted by the problem of energy waste in recent years due to energy-efficient household appliances. Residential electricity accounts for 80% of KSA’s electricity consumption. Thus, the Saudi government has been pushing energy-saving initiatives which have been exemplified by a large-scale installation of LED lighting systems in private and public buildings. Saudi Arabia imported LED lighting products from China worth USD 87.37 million in 2015 which was an increase of almost 40% over the same period from the previous year.

The electrical market in Saudi Arabia is expected to grow at a CAGR of over 10% during the period 2020-2025. Significant investments in public and private infrastructure along with the efforts of the government to encourage LED use are driving the market for LED lights. In order to promote LED lights, the Saudi Arabian government has adopted global energy efficiency standards and increased tariffs on imports of incandescent and compact fluorescent lights. There are nearly 4,700 reported construction projects underway in Saudi Arabia, the estimated value of which is USD 852.3 billion. More than 3,300 projects under the urban construction sector comprise nearly 70% of all construction activities in the Kingdom and are driven by the steadily rising Saudi population and urbanization trends.

Focus on conserving energy and reducing inefficient lighting is driving transformation. Further, wider adoption of LED, reduced illumination package prices and technology trends such as dynamic lighting, adjustable white light, and wireless control systems are factors fueling market growth. Intelligent street lighting and integrated lighting solutions that use remote monitoring, and street lighting management systems are being tried out. Increased use of Internet of Things, indoor lighting automation, “Li-fi”, and Lighting-as-a-Service are trends anticipated to drive the KSA market in years to come.

The present report provides a segment-wise analysis of the market on the basis of product type including:

The report also segments the market based on application, such as residential, industrial, commercial, etc.

Detailed analysis of the following key players covering their capacities, market share and latest turn of events such as mergers and acquisitions, capacity expansions and plant turnarounds in the market is offered in the report:

Safety light curtain is an electrical sensitive device that establishes an invisible, controlled area by utilising light beams and receiver. These are used primarily to protect workers near moving mac...

LED is the abbreviation for light-emitting diode, which is a semiconductor unit. When electricity flows in the forward direction, it emits light in different colours. High-power LEDs are a form of LED...

The growing demand for environmentally friendly goods can be a significant opportunity for this industry to expand. The Asia Pacific is leading the organic LED industry, accounting for the majority of...

A micro light-emitting diode (LED) refers to a technology that is used in displays of microscopic light-emitting various colour diodes organised into a set. These LEDs are also referred to as micro-LE...